Iconic in appearance, The Shendyt  was a type of Men’s Clothing popular through most of Ancient Egyptian History. Various models were designed and made from Flax Plant (a type of Linen) or fine Silk. Worn around the waist very much as the later Kilt, The Shendyt  wrapped and was bound on the front by cloth ties. Many were adorned with decorations or embellishments. Although Commoners wore a type of similar garment, they were mostly worn by Nobility and Royalty.

A style of broad belt was worn with The Shendyt. Developed as far back as 2,000 BC, they were ideal for the often harsh hot and humid climates of The Desert.  The front of the garment could be worn with a front Slit to facilitate movement of the legs or wrapped without a Slit. The Egyptian Military wore a garment similar to The Shendyt. These were tighter at the waist and looser at the bottom. This made general maneuvering in battle easier. Even with Egypt eventually becoming a “Vassal” of Rome, The Shendyt maintained as the overall fashion. 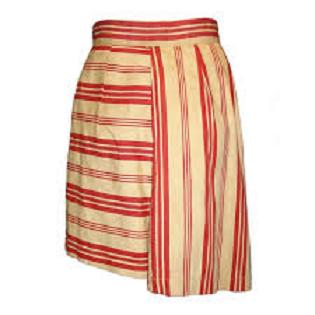