The evolutionary step from  The Coatee, The Shell Jacket was seen around the late 18th Century. It was similar to The Coatee but did not have the often cumbersome Tails. Snug fitting on the Torso, it featured looser Sleeves (unlike a Pelisse or Attila Jacket).  Decorations went from Plain to very embellished. Designed originally first Cavalry Units, it quickly was adopted by Infantry and other Branches in most World Armies. A staple in The American Civil War of 1861-1865, The Shell Jacket became the official issue of The American Confederate Army. Versions would become equally popular with American Cavalry Forces until the 1880s. The Shell Jacket would still be retained first use in France well up to World War I. Still seen today, it is used as a Ceremonial Dress with some Armies. 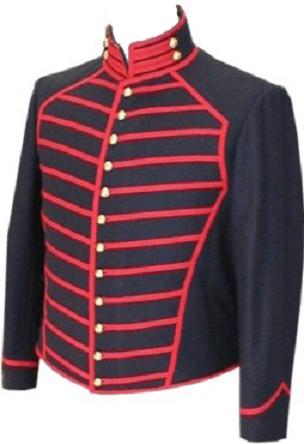