Developed in the 12th Century by Russian Light Native Cavalrymen known as "The Cossacks" - The Shashka (meaning Big Knife), was a sharp single-edged blade. Known for it's lack of cross guard or other form of hand guard protection, it was considered a "half-way" weapon for early Russian Sword and Saber classes. It was a cutting and slashing weapon, best suited for use on a horse. Pommels of the blades were often highly decorated (generally the only part of the sword that was). Carried in wooden scabbards, The Shashka was a feared weapons on The Steppes of Russia. They ranged between 35 to 45 inches long. 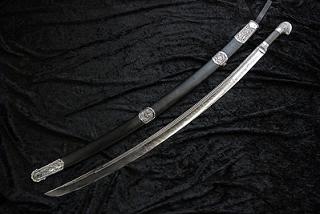