Developed in the 9th Century (and carried onward to some degree into the 16th) - the Shamshir was the predominate blade of the Persian/Turk/Muslim nations. An early forerunner of the Sabre, a Shamshir was a radically curve blade (5 to 15 degrees). Had the blade been made straight, it would have been around 52 to 56 inches long! The blade was of  a single egded variety. Similar to the Scimitar, and direct ancestor to the Mameluke sword - the Shamshir was popular with cavalry and infantry troops alike. Users would utilize a "torso twisting" technique to maximize downward thrust. Made of steel (no iron blades are known), the handle crossguard was a simple steel bar protector. Often the Shamshir had elaborate pommels and handles. Many Crusaders felt the cut of the Shamshir's blade! 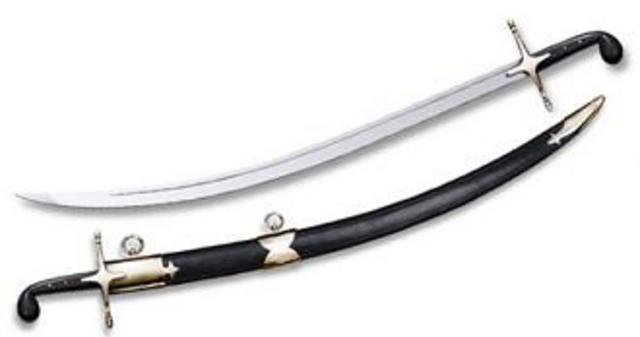