The Shallop-Type of Ship design was popular during the 17th Century in Europe. Noted as a Coastal Ship, it was noted for it’s shallow draught. The Shallop was popular as a transportation vessel between short distances. Made of wood,  The Shallop was typically 30-feet and 17-feet tall (Beam). They were both Sail and Oar powered. They could carry limited amounts of cargo and could comfortably support 12-passengers. The Shallop normally mounted Swivel Guns for defense, but could carry 6-Pound Cannon in limited number. Used in great numbers during The Gunboat War of 1807-14 between Norway and Denmark, Great Britain used Shallop-Type Vessels during The Napoleonic Wars for Coastal Defense as well.

In America, The Shallop was used by English Explorer and Soldier John Smith to explore the Chesapeake River between Maryland and Virginia (1608). Of note, he had his Shallop cut in half and carried aboard The “Susan Constant” (which also carried Colonists to The New World). Shallop-Type Ships were also used as "Ship to Ship" Transport  Vessels well into the 18th Century. 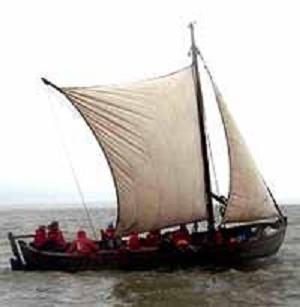