The Shabrack for a form of Horse Cavalry accoutrement, popular with Hussar Regiments, in the 18th and 19th Centuries. They were in essence a form of stylized Saddle Pad (Blanket), noted for their bright colors, fine embroidering and distinctive ''swept'' or angular appearance.

Made of Sheep or Goat skin, The Shabrack was a common Military article during The Napoleonic Wars, used by both The French, their Allies and by The English and theirs. Traditionally, Royal Regiments bore their Monarch's Signet – often embroidered in Silver or Gold Thread.

By the end of the 19th Century and into the 20th, Shabracks (when found), were used solely by Officers of various Elite Cavalry Units (such as those found today on Great Britain). Variations were used by both American and Confederate Officers during The American Civil War. Today, in The American Army, The Shabrack is most commonly used for Funeral Processions known as The ''Fallen Rider''. 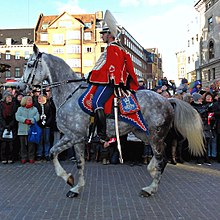