The use of Uniform Award Devices known as “Ribbons”, are derived from full size Medals. These were awarded to Soldiers and Officers for various forms of heroism and courage in battle. Examples date back to the 16th Century. By the early 20th Century, most World Armies had adopted various Ribbons as a way of displaying full sized Medals on a uniform. This was seen as easier and more practical. Rather that the full sized version, a much smaller cloth version (based on the Medal coloring), could be worn.  With the inclusion of specialized Service training and other non-Battle awarded recognition. Ribbons for these types of training and related, became the popular form of display on a dress uniform.

Made of cloth, a Ribbon may be much different in measurement according to the Country of issue. Most are several inches in length and width. Originally, each Ribbon was attached via back pins to a Uniform. In time, a Device  known as a “Rack” was invented. This was a series of metal rails upon which a Ribbon (or series of), can be placed for a more even display and wear. Another version of Service Ribbons, are Foreign or Special Service Awards. This could be given for Service in another Country or an Award by a National Head of State. In this case, The Ribbon is worn on the Left side of the Uniform. Arranged similarly, these Ribbons are often larger and bordered in metal. 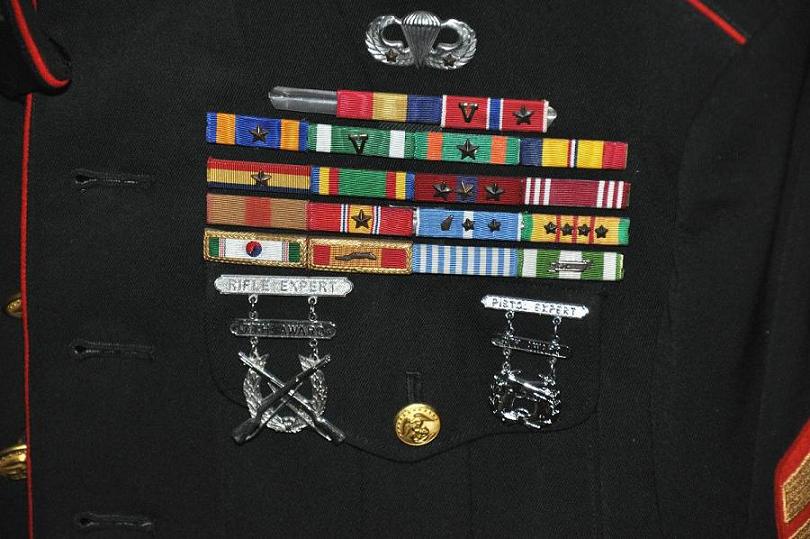