Seen and used in 1779 by Captain John Paul Jones of the newly formed US Navy, the actual designer is debated. Some say it was designed by Francis Hopkins, others by Jones himself. The flag was given it's name much later in history (to honor Jones' capture of HMS Serapis). Jones had been labeled a Pirate by The Royal Navy, because he flew “no flag known to exist” (referencing England's refusal to recognize The Colonies as a Country). Jones was known to fly The Gadsden Flag, but began using The Serapis Flag (briefly). The flag featured 13 stripes over the entirety of the flag body. Oddly arranged, 4 blue stripes were added (in no particular order) to the red and white stripes spaced somewhat evenly. The upper left quadrant of the flag featured a blue field with 13-8 pointed stars arranged in horizontal pattern. It would be replaced by the Naval Ensign version of The Ross Flag. 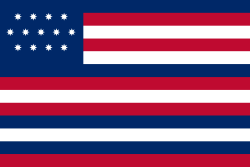