The ''Senjinkun'' or ''Instructions for The Battlefield'' – was an Imperial Japanese Army pocket book, carried by all Imperial Japanese Soldiers during World War II. The book combined Imperial ''philosophy'' with basic Combat Codes of Conduct, that every Japanese Soldier (and Officer) was supposed to adhere too. In some cases, losing One's Senjikun could bring harsh punishment and even (in some cases) death.

The Book also specifically addressed ''Seppuku'' or suicide rather than be captured or even surrendering. However, as a point of ''Honor'', an Imperial Soldier was advised to ''honorably accept'' the surrender of an Enemy. Towards the end of The War with Japan, a ''new'' version of The Senjikun was issued, which changed this Code. Japan expected that Allied Forces would in fact invade Japan at some point and ''Honorable Surrenders'' were completely omitted from The Book.

There were (19) Chapters included in The Senjikun, that also included Military Customs and Traditions as well as Wear of The Uniform and other related Military ''Field Craft'' instructions. It also included a series of (5) ''mantras'' to be memorized (and repeated) – at first daily (most of which were Imperial Philosophies regarding The War0. These were seen as a modern version of The ''Code of Bushido''. 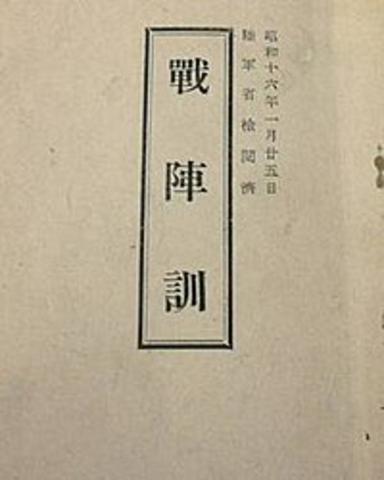