The term ''Scythemen'' is applied to a late 18th Century Military Formation of Soldiers – seen in use during Poland's Kosciuszko Rebellion of 1794. Under Russian and Prussian Control, Polish ''Freedom Fighters'' (instilled with courage from America's own War of Independence of the late 1770s), formed a Rebel Army to oust Imperial Forces of both. Without a properly equipped Army to field, much of this Formation was made up from common peasants. Most weapons were homemade or quite antiquated. However, one such such and those who used it – was The Military Scythe. It was wielded by a class of ''Melee'' Men called ''Scythemen''. The Military Scythe (as we have seen), combined the common harvesting scythe (a curved, single edged blade, often mounted to a wooden handle), with that of a longer Pole. This was a type of primitive Polearm which saw some used in many Central European ''Peasant Armies''. The Scythemen would become well known thereafter as a form of Militiamen, who without formal military training, rush to the defense of The Country, armed with their old, but effective Polearm weapons. They would (at least in name) appear several moe time in Polish History – to include The German Invation of Poland in 1939. 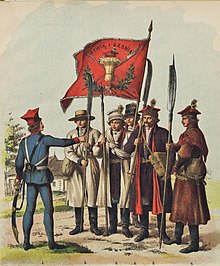