This is the most recognized war shield of The Roman Army. Although the name (in Latin can mean any shield), the Scutum has been associated with the traditional rectangular shield. Probably originating with the Greek Hoplites (4th Century B.C.), it was refined by the Roman military. Weighing an impressive 22 pounds, it was designed to be a curved, rectangular shape. Composed of three layers of wood (glued together), canvas and leather would also be incorporated into the design for strength. It also had a spindle shaped boss (on it's front). Roughly 41 inches in diameter, it was needed to cover a soldier from "the shins to just under the eyes and across to cover the entirety of the soldiers torso". Handles and straps were attached to the inside of the Scutum (for carry). Additional weapons could also be carried inside.

The basic technique of use (other than the obvious), was to be able to link up with shields from other soldiers (to the left and right of the center shield carrier). Repeated, this would create s "shield wall". Another (quite famous tactic), incorporated the shield wall with "tops and sides" or known as "The Testudo".  The Turtle formation would raise the Scutum directly overhead of the soldiers head (as well as the front and sides). This formation with the Scutum would resemble a "turtle shell". Slowly moving forward (Bossa Romana Step), the Scutum created an impenetrable protection from enemy arrows or spears. Additionally, if an enemy attempted a direct frontal assault io troops so protected, the Roman soldiers could trust and stab between the shields. Often Roman units would have their "identifiers" painted onto the Scutum front. This technique was simple. Commanders as well as other troops could easily identify themselves on the field of battle. The Scutum began to disappear from service (in lieu of smaller and lighter versions) by the 4th Century A.D. 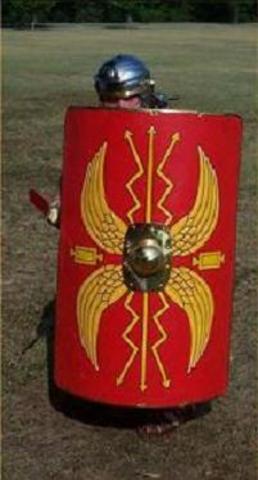