In Feudalism, the process of Scutage was developed between Kings and their Knights. Knights lived on the lands of their Lieges and derived a portion of their income from the percentages of yielded crops and goods of The Peasant Farmers and Craftsmen. Additionally, The Knight was obligated to provide Military Service to The King, when called upon. The process of Scutage developed in the 11th-12th Centuries in England. This was a payable Fee by The Knight to his Liege to "remove" himself from Military Service. Thus also gave Royalty the ability to recruit Men at Arms (or Mercenaries) - if need be. Scutage also existed in Peacetime as well. Knights, for whatever reason - found the Fee a fair exchange. Scutages were often named for a particular War or Military Campaigns (for Record keeping purposes).

The practice would eventually spread to France and Germany by the 14th Century. By Law (particularly The Magna Carta), a Scutage could not be levied against a Common Soldier. In some cases, a Knight or Lord could request a "special dispensation" against not paying a Scutage. This was due to a particular Lord providing an abundance of foods, goods or Services - vital to a Kingdoms continuance. The monies these Services provided greatly out weighed the Fees of Scutage. The practice of Scutage would end with Feudalism, but examples based on the Fee can be seen throughout History in the form of "Grafting" or "Conscription" Payments. 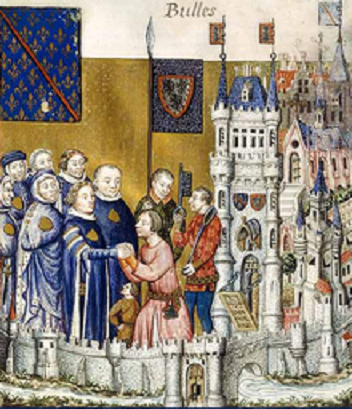