A "Modern" term for a Regional style of Late Medieval - early Renaissance clothing apparel for Men, The "Scottish" Tunic was different with regards to other Period types. Reserved for Nobility and Royalty, these pieces could either be worn "over the head" or "open front". The primary differences were in length and material. Scotland was a cold environment. As such, warmth was desired. Their Tunics were made of layered Ermine, Pounded Wool and even Calfskin. The insides of the garment were often layered in Muslim (for comfort). Often tied at the Upper from (lower neck), colors were also set. Dark Blues, Browns and Greens (Any dark color other than Red or Purple). They were worn mostly as an outer garment. Most Scottish Tunics were worn as status symbols and as such were seldom used or copied by common or poorer peoples. The style would remain in use well onto the end of the 16th Century. 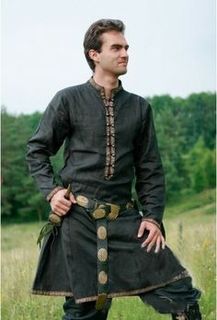