Much like The Irish Gallowglass, The Scottish Redshanks were a type of Mercenary Unit – seen in the 15th Century. These Soldiers primarily fought for Irish Armies in their quest to repeal The English Occupation of Ireland. Descended from The Hebrides Clans of Scotland, they were considered a ''Peasant Clan'' – mostly poor. Despite this, their skill as Fighters gave them a marketable skill as Mercenaries. Their name ''Redshanks'' was derived by The Scottish predetermination of Red Hair and the popular sideburns known as ''Shanks''. The nickname stuck as their identifier. Masters of Pole Arms, they were among the first to adopt early Firearms in The Region. The Scottish Redshanks are also credited with evolving the dreaded ''Highland Charge'' (a whooping War Cry Infantry Charge en mass, designed to throw an entrenched Enemy off). Fighting in most of Ireland's Wars, The Redshanks would be outlawed by Cromwellian Forces when they too invaded Ireland in the mid-17th Century. 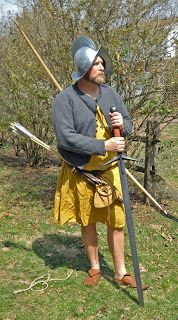