As we have seen in countless Articles, The Halberd was a popular Pole Arm, which traces it's linage back (in part) to the14th Century AD. Most Nations developed a form of Halberd. Used as a primary Infantry weapon, most were too well made for Melee Troops. Most were associated with Men-at-Arms and Guard Forces. The Scottish form (known simply as The Scottish or Gaelic Halberd), was a more refined and finer honed Head that most. Hand shaped and sharpened to enhance the multiple cutting edges. They were dominant in Scotland in the 16th Century AD.

The Scottish Halberd incorporated a smaller area Head with a Axe-Head extension. The inner flanges were notched and sharpened. The Tip (or Spear Point) was flattened and double-sharpened (much as a knife). Finally, a Horseman Hook was applied to the Rear. Unlike most Halberds, The Scottish version had a longer, reinforced shaft, designed to extend 12 to 14-inches over the Wooden Hand Pole. This was steel pegged into the wood as a reinforcement (strength). They were not seen much past the 18th Century AD as a fighting weapon, regulated to a ceremonial role. 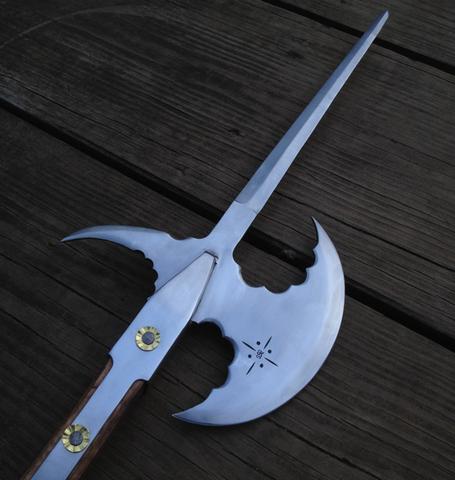