The Scorpion (or Scorpio) was a Roman "artillery" weapon, used with some frequency in The Roman Army. Very much feared by Rome's enemies (The "Scorpion's Sting"), this weapon was a catapult-type weapon with remarkable accuracy. Often described by Modern sources as an "oversized Crossbow", the Scorpion could fire metal bolts up to 400 yards (3 to 4 shots per minute). Although considered a crew served weapon, one man could still effectively deploy the Scorpion. Another "adopted" weapon idea from the Greeks, the weapon used torsion springs to create the tension needed to fire the weapon. A major problem with the Scorpion, was the complexity of the mechanism required to create tension. Highly sensitive to temperature changes (the Skeins used for tension), would react with lower torsion (wet or cold). This made the weapon somewhat problematic. Often deployed as a 6 to 10 battery unit, they were often placed on hills. Scorpio's were very effective at piercing enemy shields. Made of wood with metal components, they featured two brass "stabilizers" which also were vital to the tension needed. They were used with great effect at The Battle of Avaricum in 52 B.C. 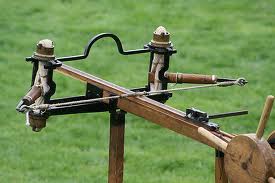