An early Middle Ages defensive arrangement, Sconce's were small defensive fortifications placed upon earthworks. Often associated with mini defensive towers, Sconse's often featured no top and were thus were not enclosed. Most often made of wood (as a field expedient measure), they were common when used with Palisades or related wooden defensive structure. Often steps and walk ways could be constructed to allow for archers or observation of enemy movements. Similar defensive types would last up to the early 19th Century. 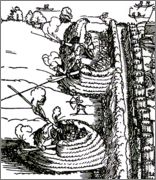