These were 12th/13th Century attempts at creating protection for the shins. Similar in design to the Ancient Greaves (of Rome and Greece), Schynbalds were metal or heavy leather plating that were strapped to the leg. It was not connected to other armor components. In some cases, they would be worn under the clothes (to conceal them). They were often combined with Chain Mail for added protection. Favored by Archers and Spearmen (when they could get or afford them). Often, Nobility would wear elaborately decorated versions. By the early 15th Century, most Schynbalds had been replaced by component armor. 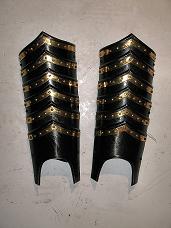