Although the flying of The National Flag is a common sight seen in the grounds of every American School and Institution of Higher Education, the practice was not always so. Prior to 1812, Schools (both large and small) did not fly US Flags. The first example of a US Flag being used by a School, was in The State of Massachusetts. The Colrain School began to raise a hand-made Flag outside everyday School was in session. This Flag used the traditionally 7 to 6 Stripe Pattern. However in the Blue Canton was a rather haphazard placement of 15-White Stars with a much larger Star placed in the Center of these. Still not adopted by other Schools, it was not until after The American Civil War  (1866), that Schools began to fly The National Flag. The practice was more doubt influenced by The Colrain School. 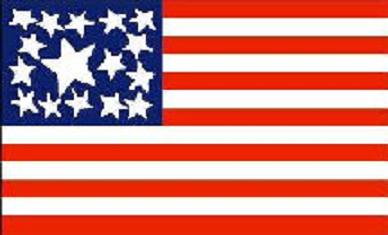