Also known as Satterlee General Hospital and Satterlee Union Hospital, this Facility was one of the largest Medical Hospitals operated by The Union Army, during The American Civil War of 1861-1865. Located in the western portion of a then ''wild'' (wooded) Philadelphia, Pennsylvania, at it's height – it supported some 6,000 wounded Union soldiers, mostly injured in The Eastern Theater of The War. Officially opened in 1862, Satterlee consisted of 34 wooden Wards which supported 2,500 beds. Later, with the casualties from the epic Battle of Gettysburg (1863), tents were added to support 1,500 more. The Facility would soon become a ''self contained City'' in it's own right, with it's own water source, and support buildings. It also operated it's own morgue and graves registration section, responsible for the shipping of deceased soldiers – home to their loved ones.

In addition to The Union Army's Hospital Corps. Staff, Satterlee was also staffed by a number of christian religious groups, such as The Daughters of Charity, who provided nursing and overall comfort to the wounded. By 1864, a containment wall (14-foot tall) was added, as was permanent laundries and kitchens. During a one month period Satterlee ''served'' 335,000 gallons of fresh milk, 800,000 pounds of bread and 16,000 pounds of butter. Of the 50,000 soldiers estimated to have been treated at Satterlee, only 260 died of wound complications. It was seen as the most effective care facility of it's kind during The War. With the end of The War in 1865, Satterlee quickly began to diminish its need. It was closed in later in the year and slowly became to decay due to lack of care. In the 1880s, a major growth ''spirt'' in Philadelphia gave way to the razing of Satterlee Hospital, with it's grounds eventually being used for commercial and residential needs.

A simple Monument called The Gettysburg Stone (erected to honor the wounded survivors of that battle), still sits on what would have been considered the center of the old Hospital grounds – today. 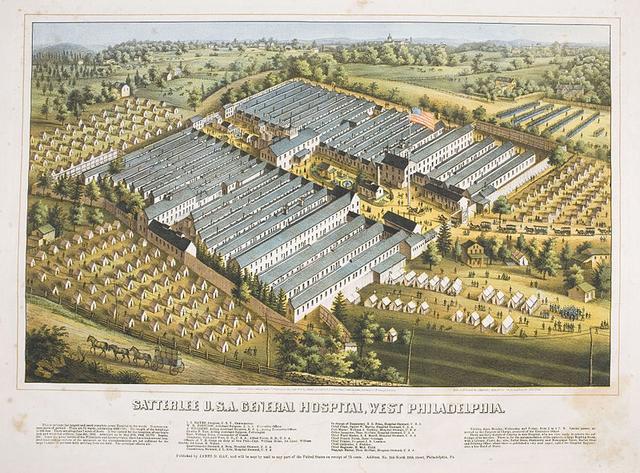