The term Sapper  (meaning to dig or undermine), originated in Medieval France during The Hundred Years War. These were highly specialized Soldiers, trained in the Art of what would later become "Combat Engineering". These Men were trained in the building of Fortifications and Field Defenses, as well as the construction of the various Castle defenses incorporated into it's defense (Murder Holes, Arrow Slits, etc.)

Due to the nature of work, Sappers came under direct attack regularly. As a result, many became proficient with weapons (in particular, The Crossbow). Originally, Archers were assigned to Sappers for their protection while they worked. The basic tools of The Sapper was the shovel and axe. They had to wear protective apparel such as Chain Mail, Halberks, Gambeson and related. Various Helmets were also incorporated - with The Kettle Hat becoming the most popular (due to non-inhibited vision).

In addition to their battlefield constructions, Sappers were used to clear pathetic and trails for Armies to move. In later cases, Sappers began adept in placing countermeasures (traps and explosives). Sappers were not common Soldiers. Often Apprentices or Journeymen to Master Builders, they were retained by Royalty. As such they were mostly well paid. Conversely, a Sapper was considered one of the most dangerous of battlefield positions. Time and developments in Military Engineering would also include changes to Sappers. Evolving well into the 20th Century, some Nations still retained their 15th thru 19th Centuries appearance for Ceremonial use, even today. 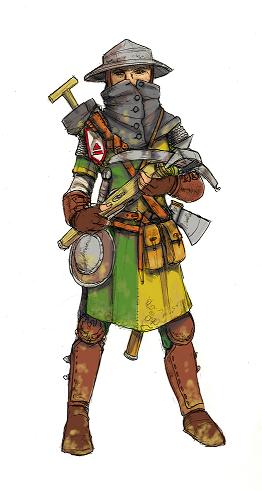