Founded on December 4, 1786 on The Feast of St. Barbara – Mission Santa Barbara was the 10th of The Mission Forts in Early California. It was also the only Mission to remain in Franciscan Order control. Originally consisting of 3 Chapels, these were lost to The 1812 Earthquake. Rebuilt, the Mission operated a large gristmill and was the main “Pumping Station” for the local aqueduct responsible for providing water to the Region (needed for crops and overall survival). 2 large reservoirs were built to contain reserve sources. Up until 1993, the Mission was still considered a valuable component of the “modern” City of Santa Barbara. The Mission also the scene of the raising of an “All Indian” Militia for not only the defense of the Mission, but the small Village of Santa Barbara.

Argentinian Pirate Hipolito Bouchard had been raiding the California Coast (and even attached several Missions). The Spanish Presidio (Fort) of Santa Barbara was too undermanned to mount an effective fight. The Priests of the Mission recruited 150 Native American Chumash and “taught” them close order drill as well as basic tactics. The Priest's and their Militia marched to The Presidio and added their weight to it's defense. It was said that Bouchard's men saw what appeared to be a “well organized Force” waiting in The Presidio – and left Santa Barbara Harbor without a fight! Although many Missions fell prey to The Mexican “Confiscation Act of 1821”, Santa Barbara Mission was allowed to remain, and became the official “storehouse” for many of the other less fortunate Mission's important documents and books. The Mission Library still maintains some 3,000 books and documents from this Era. It is open to History Scholars and Professors doing research.

In the 1840s, Santa Barbara Mission became the impromptu “Cathedral” of The Region due to severe earthquake damage to the local Archdiocese. As a result of the honor, it is the only Mission within the system that features twin Bell Towers (as opposed to only 1). It is still considered a “Cathedral Church”. With US President Abraham Lincoln's “return” of The Missions to Church control in 1861, a debate (and near battle) – erupted between wealthy California (Mexican) Politicians and The Church. The Politicians had seen the Friars through many “hard times” during the Mexican Period and did not what them to turn the Mission over back to The Church. Fears of another informal “Confiscation Act” was levied against The Church by Califorino “Lawmakers”.

This “battle” would last until 1925 (when the issue was considered too “old”).The Church took overall control of Santa Barbara Mission (but it is run on a daily basis by The Franciscan Brotherhood, still). The Mission also holds the record for having the longest, unbroken Choral “singing” of The Latin Mass. It has been performed twice a day for 140 years! The Mission also was home to a Theological Seminary School for Men starting in 1877. The University of California – Santa Barbara merged their program with The Order's and gave them a new structure. The Mission Seminary closed in 1968. 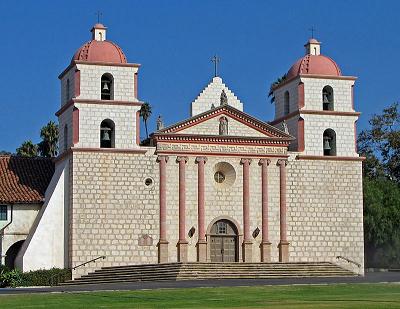