A Sanbenito was a specialized garment worn by Heretics, during the height of The Spanish Inquisition (16th Century AD). These garments included a cloth Stole which was worn around the shoulders and hung over the chest of The Accused. A conical Hat (similar to a Duns Scota or ''Dunce Cap'') was worn on the head. Both garments contained painted imagery of ''Demons and Devils'' and often ''Hellfire''. Sometimes Crosses were embellished on the garments. The color Yellow and White were most used. The Sanbenito was to be worn in Public as part of The Accused ''penance'' for His or Her ''crimes'' against God and The Church. They would not have been worn in prison or similar custody. With execution of The Accused, rarely was The Sanbenito worn (but some examples in painting and illustrations of The Period do show them being worn during a Burning at The Stake). 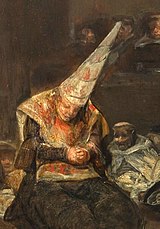