Founded in 1772 by Fr. Junipero Sierra, The Mission of San Luis Obispo was named for St. Louis of Anjou. Unusual for it's combination of Belfry and Vestibule, such is the only type within the “Mission System”. It is also shaped in an “L” shape (as opposed to either the traditional “Square” or “Cross” designs). Why this was done, is unknown. Upon founding, food and supplies were dwindling. The lack of adequate farm land would have caused the Colonists to eventually starve. Had it not been for an “ancient map” of the Region from a 1602 Expedition to the area – this fact would have occurred. As the story goes, Fr. Sierra “”remembered” the map in great detail. Re-drawing it for the Military Garrison, they set out into a location nearby called “The Valley of The Bear”.

Aptly named, the Garrison was able to hunt for the Great California Brown Bear. The resulting meat, not only saved the struggling Garrison and Colonists, but would help to establish Mission San Luis Obispo. The local Native Tribe (Chumash), were friendly and open to conversion. This gave the Mission the Labor Force needed to establish a proper brick and mortar Mission. As “5th” in Sierra's Mission “chain” - San Luis Obispo was able to finally develop agriculture and become self-sufficient. In 1774, a violent off-shoot of the Chumash attacked and set fire to the roof of the Mission (burning it down). It was then than Fr. Sierra “developed” the idea of the iconic “Red Tile Bricks” (now a common feature in California building).

Placed in an overlapping pattern, the bricks (when struck by flame) – were undamaged (much to the distaste of the Indians!). Soon the building method became “the standard” for all Missions (which produced their own). The original Bell Tower (damaged in a 1794 earthquake) was not replaced. In the 1840s, the Mission was abandoned and fell into ruin due to Mexican “Confiscation”. Sold into private hands, the Mission became the regional Courthouse and Jail. Renovations to restore the Mission back to it's semi-original state began in 1872 (with it being completed in 1933). The City of San Luis Obispo “grew up” around the Mission (now the center of Town). It is still a Parish within The Roman Catholic Archdiocese (with a Museum as well). 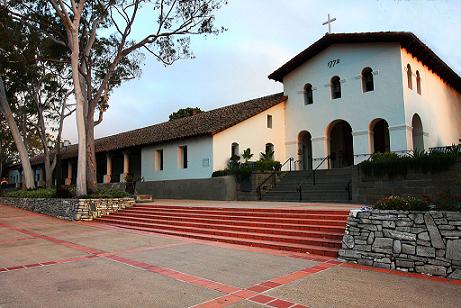