The San Diego Mission was the first in the “Mission System” structures built in California. Construction began in 1769. Named for St. Didacus (more commonly translated into “Diego”), the location was originally scouted in 1542 with The Cabrillo Expedition. The first contactee with the local Native Tribes was Fr. Luis Jayme. The encounter did NOT go well (he was murdered by them!). Undaunted (and with the help of Spanish Cannon and Shot) – the region was somewhat pacified. The building of the Mission Fort was somewhat a crucial first step for Spain. Fearing the very real incursions by Tsarist Russia (also bent on capitalizing on Northwestern America), the need for a “first base” would lead to an onrush of Upper California expansion.

A Cross was raised on the site of the San Diego Mission in 1769. As construction of a temporary wooden structure and palisade began, so too did the construction of the Presidio Fort near San Diego Bay. However, a reliable water source was the issue for the Mission. Within several months, the Mission was relocated some 6-miles East (and closer to The Presidio). It was here that the brick and mortar structure was begun in earnest (with the help of the now converted Nipaquay Tribe. However, by 1774 – abuses and graft against the Natives, resulted in a Revolt, that caused the destruction of The Mission (fire) and a marked loss of life (as well as setting back Conversions). Over 800 Warriors set upon The Mission and surrounding Colonists.

It was not until 1776 that peace would eventually be restored. The Mission was rebuilt and would continue to serve as a focal point of Colonial culture and religion for many years. During The Mexican Revolution of the 1820s and 30s (and Mexico's declaration of independence from Spain), The Mission fell into disrepair and misuse. From the 1840s thru 1862, The Mission was converted into a US Military Post (with the California Revolt and impending Mexican War). The San Diego Mission was one of the first “Old Spanish” Missions receded back to The Catholic Church in 1862 by US President Abraham Lincoln (on request by The Vatican). Severely damaged by multiple earthquakes, a massive renovation of The Mission was undertaken from 1931 to 1941. Designated a “Minor Basilica”, it still serves as a Parish Church today.

The Mission still has it's original 18th Century Bells. The original Bell Tower (long ago damaged by earthquake) – was replaced with a Tower Wall for the Bells. Many of the original Religious Order Founders are still buried there, as is the first Native American converted to Christianity in California. 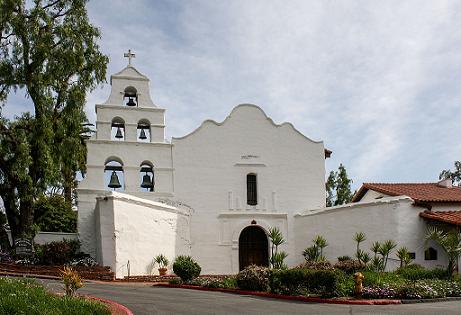