Established in 1782, The Mission of St. Buenaventura was the last founded by Fr. Junipero Sierra. Legend states that Sierra first “saw” this Mission in a dream (and that led to his fervent desire to build in California. History does not show why this Mission was his “last” and not first. Much of the original Mission and surrounding structures were destroyed by firs (with only a very small portion still surviving). The Mission was seemingly “cursed” by successive fires in it's long history (more than any other). It was only in 1809 that a functional and completed Mission was dedicated. The Mission is also the only one in the Systems to have a moderate sized “battle” happen near it. During The Mexican War of the 1840s, some 438-Mexican defenders from the Mission engaged a larger American Force under command of Gen. John Fremont. After his victory over The Mexicans, he briefly used the Mission as his Regional Headquarters. Badly damaged by the 1857 Tejon Earthquake, there was not much to cede back to The Church in 1862. It was not until 1893, that renovations began (completed in 1922). Beautiful Gardens, Fountains and Art were built and placed there). The Mission is a Museum with occasional use by The Church for special functions 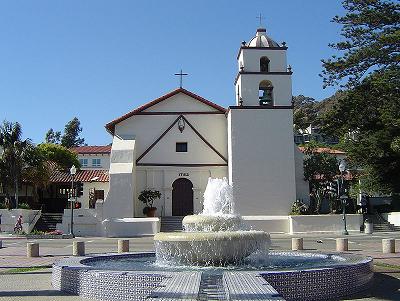