The “Pala Mission” was founded in 1816 in San Luis Rey (Northern San Diego, California). It was designed to provide supply and material assistance to the several San Diego Missions in the Region. The Site was originally “claimed”” in 1795 by an earlier Spanish Military Expedition. However, at the time, there was no need for an “Asistencia” structure. After initial construction, a permanent Chapel and Granary was added. The Chapel was large (for the structure it served) – with 145 foot high, 8-foot thick walls of region stone and construction. The Bell Tower is a free standing structure and one of the few original such structures in California. Although “sold” by The Mexican Government during “The Confiscation Act”, it was still used by visiting Priests. Badly damaged in 1899 by an earthquake, Pala Mission was renovated by private funding and later returned to The Catholic Church. The Pala Mission is also the only surviving Mission to still provide religious needs to a local band of Mission Native Americans. It is still very much active within The San Diego Archdiocese. 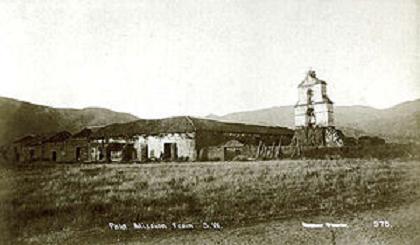