Identified as The Mission of St. Anthony, the Mission was founded in 1771 by Fr. Junipero Sierra. It was the 3rd such Mission Fort established in the new “Alta California”. Also known for officiating the first “Christian” Marriage in California, St. Anthony Mission also was the 2nd to experiment with “Tiled Roofing” (now iconic to California). The design, brought about as a way to disuade Native Americans from setting fire to the roofs during attacks – was an important addition to building during Spanish Colonization days.

By 1810, the Mission was finally completed. At one point the Mission had over 1,800 inhabitants. Oddly, no Colonists settled within the Mission – and this would be a death-knell. By the Mexican “Confiscation” Era, the Mission had dwindled to barely 150 people. It had to relay heavily on support form far Southern Missions for food and supplies. In 1849 (now derelict), the Tile roofing was salvaged by The Pacific Railroad Company for reuse on their nearby Terminal construction. “Rescued” in 1904 as a Historic Landmark, renovations (with assistance of The Catholic Church), restored much of Mission St. Anthony to an 1820s appearance.

Mission St. Anthony is now completely “surrounded” by The US Army's Ft. Hunter-Ligget Military Reservation (when the land was acquired by well-known Hearst Family – and given to The Government close to the beginning of WW II). The entirety of Mission St. Anthony is 85-acres. Considered “active”, The Mission is still used on occasion by The Church (but is mostly a Museum). 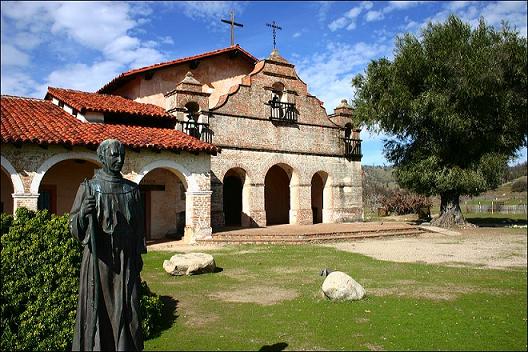