A well known piece of Uniform Military Equipment Worldwide, The Sam Browne Belt was a specialized type of Load Bear gear, made to support a Sword and Holster. Tracing it’s origin to British Army Officer (and it’s namesake) Major Samuel Browne, it is still used today in it’s basic form by both Military and Law Enforcement Agencies. Browne, who served in India during The Sepoy Mutiny of 1857, received a “traumatic injury” to his Left Arm. During a Charge against an Indian Battery, his Arm wad literally severed by a Sword blow. Recovering, he found he was unable to draw his Sword, due to the loss of his arm. Undaunted, he began to deign a Sword And Equipment Belt to suit his handicap.

The Belt wad 2 ¼ to 3-inches wide and designed to fit over the waist and Outer Garment or Service Coat. A secondary supportive Strap was attached by a hook on the opposite shoulder, lopped over the shoulder and having a second attachment point on the rear of The Belt. With a Sword worn on the left Hip, Browne was able with ease to draw his Sword. Browne also devised a series of Cross Straps to created more support on the Chest. He likewise developed a Chest Mounted Binocular Case and Pistol Holster. His design became so popular, that other Officers wanted to procure his design as well. Officially, The British Army copied the design in the 1890s, and first issued it during The Boar Wars. Oddly, Browne never Patented his design.

The basic innovation of The Belt, was it’s “Quick Release” Front Buckle. Appearing as a regular Brass Fork Buckle, it was threaded through the Belt. A matching double Hook was installed on the opposite end. This allowed the Buckle to latch into place and appear to be threaded as a regular Belt. The Belt could be unhooked with one hand. With time, The Belt, which still retained his name, became a type of Holster Belt, synonymous with an Officer’s Uniform. Later, higher Ranking Non-Commissioned Officers adopted them as well. Although Black, many Models were Brown. Most all Countries in The World adopted  a version of the Sam Browne Belt with their Military.

With Modern Uniforms, the use of the innovative Sam Brown has fallen (or is falling away). Some Units, like The United States Marine Corps. still uses the Sam Bowne with it’s Officer and Drill Sergeant Uniform. The same is said with Law Enforcement Agencies. The adoption of The Belt in America, goes back to the 1920s, and is still used today to carry basic Equipment used by Police. However, the use of the Cross Strap is often not included. Eventually, leather gear will be replaced by Tactical Nylon (as us being seen with most Agencies). 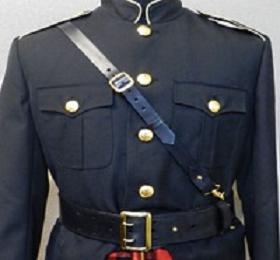