Although not a infamous member of the long list of those who sailed during the "Golden Age of Piracy", female Pirate Sadie Farrell would have fit in perfectly. Possibly born in 1829, Sadie lived along the ruthless Port of New York Harbor. Rampant with Gangs and all manner of criminal, Sade learned very quickly how to survive (especially as a woman in the 19th Century). Becoming a Mugger (a person who beats another and steals his money or property), Sadie developed a clever approach. Said to be "not unattractive", Sadie would use her "charms" to lure her victim into the shadows - and then repeatedly "head butt" them into a stuper! Thus earned her the nickname "Sadie The Goat".

Unfortunately, Sadie got into a fight with a female con-woman with Port Gang connections. Sadie wad said to gave bitten off the ear if the woman (even keeping it pickled in a jar of alcohol as a final rebuke!) Fearing for her life now, Sadie fled Upstate. With the advent of The,American Civil War (1861-1865), many men chose not to fight for either side, resorting to making money in a more "easy way". Sadie must have done well as a Mugger, for she purchased several River Schooners and recruited some "like minded" Pirates. Sadie, now dubbed "The Queen of The Riverfront", attacked many Commerce ships on The Hudson and (then) Harlem Rivers. Using the "Jolly Rogers" Flag, Sadie and her River Pirates made quite a living it has been said.

Due to The War, local and Federal Authorities were unconcerned (or unable to waste resources). So prolific was Sadie, she plied her trade up to 1869! It was said she grew tired (and rich) from her retirement, and quit. She "missed" her New York Harbor home. Going back and seeking out her one time (and earless) adversary, she made peace with her - and returned the pickled ear she STILL kept with her! What happened to the "Queen of The Riverfront", is a matter of conjecture. Some say he squandered away get ill-gotten fortunes on alcohol and gambling, dying yet another old homeless Harbor "Bum". Others say she married and lived out her life in peace. Some even say she never existed, that her story was more Urban Legend than anything else. Reports of River Pirates were likened to Confederate Privateers. We will never be sure. 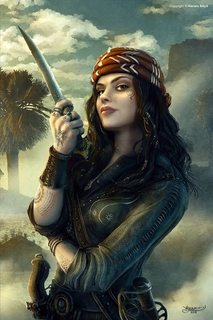