Born out of necessity, the Medieval Russian Armor known as “Wooden” Armor was just that – wood! A common feature of 8th to 13th Century Russian warriors (and their cultural sub-sets), a suit was made fairly the same as a full Lamellar type. The basic design was obviously “borrowed” from early Rus contact (in combat) with Byzantine Forces. They featured a similar circular Breastplate, mounted to the front. The front, rear and upper shoulder hangers were first pattern cut from treated pliable leather. Small pieces of heat treated wood, shaped into plate strips were next constructed. These pieces were next lacquered with animal fat glue and allowed to harden. This process was repeated many times over (as many as 4 times). This created a very strong shield and could easily protect vital organs. Normally, the components were laced together with leather strapings. Cheap and easily to acquire (but time consuming to make), they were often worn with heavy quilted underclothing (similar to a Gambeson). In some cases, Chain Mail was also used to protect arms and legs (also this was often cost prohibited). 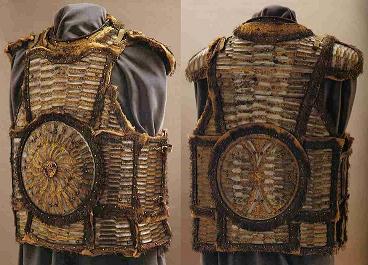