The Streltsy were some of the first Russian Soldiers to be formed as ''Armed'' or ''Firearm'' Infantry in the 16th Century. They were originally formed under the rule of Tsar Ivan IV (''The Terrible'') around 1545. He envisioned them as his personal Bobyguard and thus equipped them in the very ''latest'' and ''best'' of military equipage. He then created small (but sizable) Regiments of ''Firearms Infantry'' for use in The Livonian War (1558). They were an effective ''tide turner'' in several battles and engagements.

Originally, The Streltsy were recruited from the Sons of Nobility. As The Russian Treasury began to run chronically short of funds due to protracted Wars, many of them could maintain their well supply of weapons and powder. In time however, recruitment was lax (as was training). The Regiments attracted less than honorable types. But his point (1600), The Streltsy were no longer used as an Imperial entity, but they were still considered an Elite Force.

Originally paid, by the 17th Century, Streltsy were reduced to Irregular Infantry, often allowed to forage off the Land. As one would expect, this created major problems. Most Streltsy were regulated to Frontier or far North Garrison service. The Streltsy were also ''Masters'' of the Russian Guyay-Gorod (or Mobile Shield). As previously discussed, this allowed their Regiments to move onto a Field (protected) - and to be able to fire their weapons from behind the wheeled wooden walls.

In The late 17th Century, The Streltsy were back into Imperil Court Politics, used by Peter The Great as a type of ''Praetorian Guard'' (of sorts). They were used to strong arm potential rivals to The Imperial Throne. They were somewhat effective in this role. However, towards the 18th Century, several Streltsy Regiments began to revolt against Imperial control, with Tsar Peter dissolving them in 1720. However, their military traditions would be passed over to the famed Imperial Guard known as The Preobrazhensky Regiment (considered one of the oldest serving Russian Imperial Guard which is still in existence). 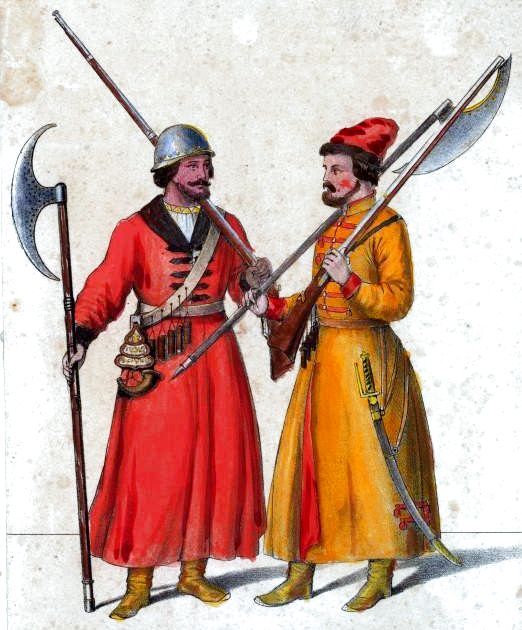