The Imperial Russian Infantry Corps. of The Preobrazhensky Life Guards was formed by Tsar Peter I (The Great), in 1683. They were named for a small village near Moscow, Russia (named Preobrazhensky). The Tsar had been conducting war games and hence the name for this Regiment. In the Regiments beginning, recruitment was open to any male Russian citizen (but by the 18th/19th Century, only young aristocratic noblemen could join).

The Regiment wore the Dark Blue with Red facings of Russian Infantry. The Regiment distinguished itself during The Northern Wars (1700s), The Napoleonic Wars (called in Russia The Patriotic War of 1814) and The Russo-Turkish War of the 19th Century. The Regiment was also pressed into service by Catherine The Great when she instituted a bloodless coup against her husband Peter III. From 1762, The Guards Regiment was considered the most elite Regiment one could be associated with. The Regiment was broken down into 4 battalions of Bombardiers and Grenadiers.

The Regiments high casualty rate during The Napoleonic Wars is testament to their bravery and determination to not leave the field of battle. Their "battle flag" was awarded to them for their refusal to break ranks during a massive French cavalry charge at The Battle of Kulm (1813). The Regiment was disbanded in 1917 (with The Russian Revolution). 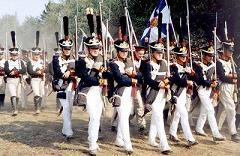