The Pavlograd Life Hussars were formed from several pre-existing Cavalry Regiments in 1783. From 1798 until their disbandment in 1918, The reigning Tsar of Russia served as their Colonel-in-Chief. The Life Hussars fought in many of The Russian counter-offenses against Napoleon's Invasion of Russia (1812). During their Napoleonic War service, several Squadrons of The Regiment were armed as Lancers. They retained this weapons until after The Wars. The Hussars fought also in The Turkish-Russo War of the 1820s and The Hungarian Uprisings of the 1830s. These actions earned them Imperial Shako (Hat) Badges for their actions. The Life Hussars saw most of their later military actions putting down revolts against Tsarist Rule.

The Regiment (once modernized), fought in World War I. It was disbanded after The Russian Revolution in 1918. The Regiment wore Dark Green Uniforms with a Red Front Facing. Originally, they wore The Mitre Hat, but with time this was replaced with various Helmets (as was the custom with Imperial Russian Regiments under Imperial command). The Regiment (although a Mounted Regiment) – still fought as Dismounted Infantry. Regardless, they carried the traditional Saber with their firearms evolving from black powder musket to the later automatic weapons. They retained their Cavalry Mounts into World War I. 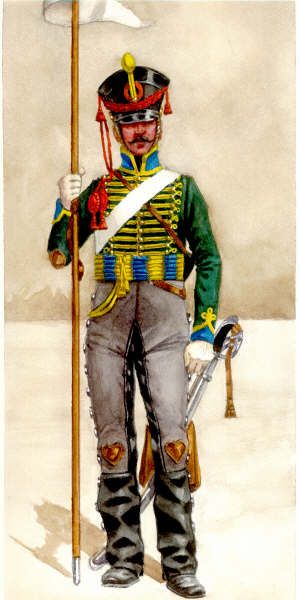