Russian Order of Merit to The Fatherland

The ''Russian Order of Merit to The Fatherland'' is an Award first created in 1994 by The Russian Federation. It was the highest Award given by The Federation until 1998 and The Order of St, Andrew. The Order was not a former Soviet adaption. Issued in (4) Classes (both in actual Medal and Ribbon), The Order is given to both Civilian and Military (Ranking General Officers) Persons, who greatly contributed to the advancement of ''Peace, Friendship, Statehood and Co-operation with other Nations''. Although NOT linked to Soviet Orders of a similar category – those who were Awarded the Title of ''Hero of The Fatherland'' under The Soviet System, were automatically awarded this as a replacement. The Order is a Collar wear issue, of Red Ribbon. A Cross Pattee of Gold with the engraving of the word ''Honor, Benefit, Glory'' is placed on The Front. An attached Starburst in Silver (above), had The Dual Headed Imperial Eagle applied. Lower Classes of The Order (4th) normally do not have The Eagle. 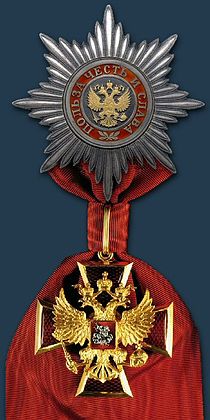