The first designs for The Russian Mendeleev Tank was in the year 1911, even before the start of World War I. It was envisioned as a ''Landship'' capable to transporting not only Soldiers, but being able to bring to bear massive amounts of Artillery fire at a specific target. Much interest was put into The Mendeleev by The Imperial Russian Hierarchy. By 1915 however, plans shifted such that no further interest was given (favoring pre-built and smaller Tanks from Foreign import).

As for it's design plans, The Mendeleev was operated by (8) Crewmen. It would have weighed 173-Tons. Roughly 42-feet in length, it used a dual-tracked system with a proposed 120-HP Engine commonly used in early Submarines. The Tank would have been able to achieve 15-mph. Armor plating was speculated to be around 2-inches, making it one of the most largest and strongest World War I Tanks ever built. Armament was slated to be a 120mm Main Gun supported by Machine Guns. 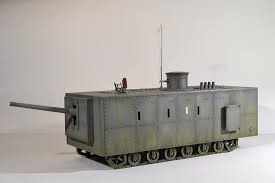