Developed in the 18th Century (and continuing into the 19th), The Licorne Cannon (sometime called "The Unicorn") - came from Russia. It was a hybrid combination of cannon and howitzer. Having a longer barrel than contemporary howitzers, it had a flatter trajectory and longer range. The weapons powder chamber was smaller at the gun's rear and was conical in shape. This made loading shells easier. They also could fire both standard shell and heavier howitzer shot (making them a dual purpose weapon). Version designed to fire 10, 20, 40 and 80 pound shells were also made. Barrels were constructed of cast iron and mounted on heavier carriages (to compensate for their great weight). The Licorne had an easy effective range of 2,000 yards. They are considered one of the longest running production guns in Russia from 1757 to the late 1850s. 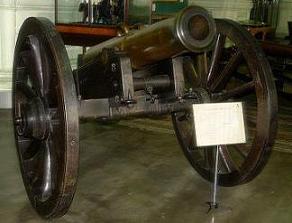