The Russian Legion was an Imperial Military Formation sent to France to assist them in The War with Germany (World War I), in 1916. Russia committed 300,000 of it's Soldiers to the diplomatic agreement, but in reality only 10,000 service. Composing (3) Battalions of various Specialties, the majority of these Russian Forces were culled from The Imperial Reserve (and were in fact not Front Line Troops).

Most noted for their fighting in Verdun, Monastir and various late War Operations, problems began to develop in April of 1917. News from Home of the impending Revolution against The Tsar, caused many Units (with sentiments on both fronts), refused to fight and wished to go back to Russia to serve. The tensions rose to open warfare against Imperial Russian and French Forces, when several Companies fought against the order to remain. Several thousand were taken prisoner. These would be sent to North Africa until exchanged at the end of The War (1918).

Despite the rebellion, several Battalions earned The French Legion of Honor for their heroism under fire against Germany, in particular during The 2nd Battle of The Marne and Amiens. Disbanded after The War, some Veterans went back to Russian to participate in The Civil War while other – remained in France. 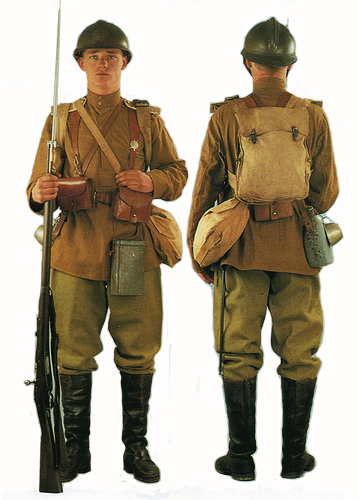