From Russia, The “Oryol” was one of the first Russian-built warships of Tsar Alexis I fledgling Navy.Designed from Western European shipbuilding plans, “Oryol” was launched in 1668. As Russia began to venture out into Trade missions, her Merchant Fleet came under Pirate and Privateer attack. The “Oryol” was first tasked to protect Russian Trade interest. A Frigate, “Oryol” was 250 tons displaced and 100 feet long. She had a 25-foot beam and carried 22-guns of various medium poundage. Considered a “close quarter” fighter, “Oryol”never got the change to service her intended mission. While in Port at Dedinoyo (near The Caspian Sea and awaiting the Winter thaw), anti-Tsarist Rebels captured her and burned her. The Rebels took her guns (which were never recovered). 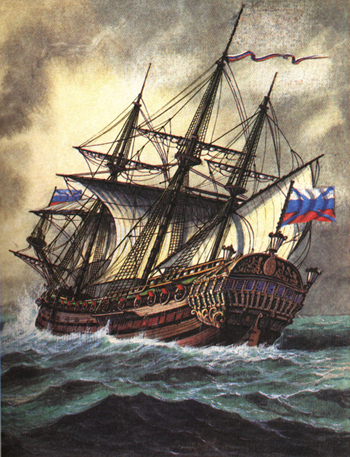