An Imperial Russian “Dreadnought” Class Battleship, The “Knyaz Suvorov” was launched in 1902 and saw service during The Russo-Japanese War (1904-05). She was of The ''Borodino” Class of Warships. During the epic Naval Battle of Tsuhima (1905), The “Suvorov” engaged the massive Japanese Warship “Misaka” of which – despite her heroic action was literally blown to pieces by The Japanese Warship. Still, her Crew refused to surrender, continuing to fight with little of her weaponry left. (20) Russian Officers were saved, by the remainder of her 900 odd Crew perished at their stations when Japanese Forces fired the final (7) Torpedoes at her burning hull. The “Knyaz Suvorov” was 15,000-Tons displaced. She was 400-feet long with a Beam of 80-feet. She was powered by (20) Steam and Coal Boilers and could achieve12-mph. She was armed with (2) 12-Inch Main Guns, (6) 12-Inch Guns, (20) 73mm Guns, (200 47mm Guns and (4) 15-Inch Torpedoes. Her Armor Plating ranged from 1 to 19-Inches throughout. She was considered one of the worst Battle related Naval losses suffered by The Imperial Russian Navy up to that date. 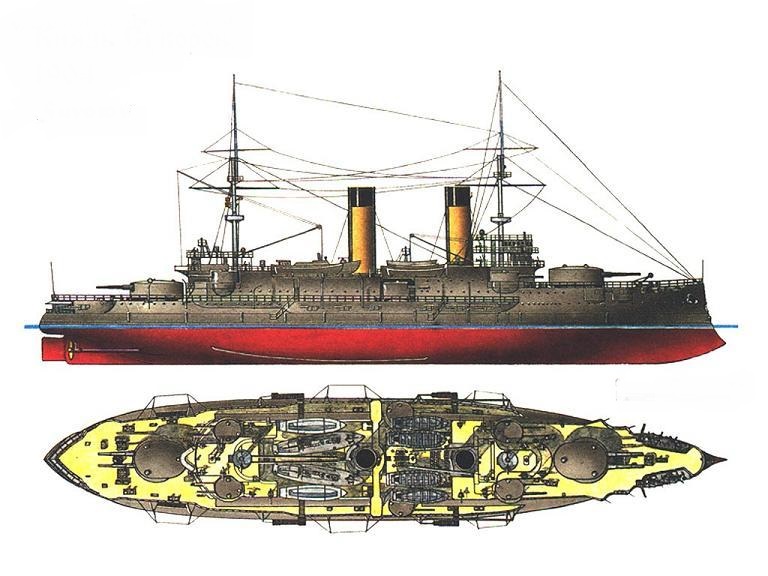