Originally, the primary training weapon of a Gladiatorial School, The Rudis was a wooden representation of the standard Gladius Sword. Designed to have a dull tip, it was used to train the potential Gladiator. Later, a sharpened Rudis was used, to teach the Gladiator how to properly stab and thrust (the primary goal of Gladius use). Later, The Rudis became a symbol of Gladiatorial “freedom”. IF a Gladiator was popular (and survived), he may be granted his freedom (normally only given by The Emperor). It has been speculated that upwards of 20 matches needed to have been “completed”. When The Rudis was awarded, it may be engraved with the Gladiator's name and his achievements. Other versions were plain and symbolic. If a Gladiator chose NOT to retire (but fight as a free man), he was referred to as a “Rudarius”. There were different levels of Rudis awarded (although they became free with award). Most Trainers, Groomers, Helpers and of course Referee's were ALL ex-Gladiators who had received their Rudis. 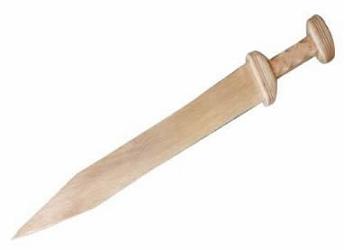