Consisting of (8) Companies of Standard Infantry, The Royal Sicilian Regiment was raised in Sicily (Italy) in 1806 by King Ferdinand I. They supported The British effort against The French and their Allies in The Napoleonic Wars. They were paid by The British Government. At times, they were grouped with the previously discussed Royal Corsican Rangers. The Sicilian Regiment was likewise commanded by a British Officer. They fought in Egypt and later participated in The Peninsular War (1809). The Regiment earned a good reputation for their relief of the plague ridden populace of The Island of Ponza. They disbanded in 1816 after The War. They wore The ''Scarlet Red'' Coatee of The Regular British Army, as was unusual for Allied Forces.

Their Standard was a White Field in it's entirety. Centered was The Royal Crest of Sicily. The Upper Left canton feared a Full Colored British Union Jack. No other embellishments were added. 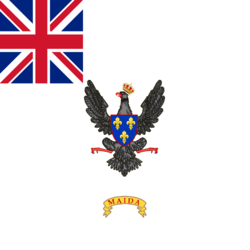