During Scotland's Independence Period, the Country maintained a small but effective Naval Force. Used for protection of it's Coastline, The Royal Scottish Navy adopted what is erroneously called “The Red Duster” - the term was probably taken from The Red British Ensign (in use at during The Era). The Scottish Naval Ensign had a Red field (entirety), with a smaller Scottish Nation Standard placed on the far left Canton. The Scottish White Saltire (Cross) – or “The Cross of St. Andrew” featured a Light Blue Field. The Scottish Ensign flew until 1707 – when the Country “officially” merged into The British Union. 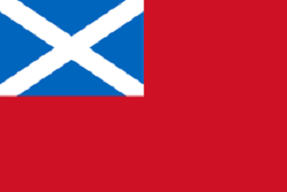