These types of shields were seen in the early Middle Ages and continued through (in some form), into the 13th Century. Common among foot soldiers, they were made of wood, sinews or rope, leather or metal plate. They were cheap and provided some protection to the carrier. Often small spikes were punched through the Rondache (making it a contact weapon). Often painted with warlike symbolism (for shock effect). The Rondache were in the same family as The Buckler (which were smaller). 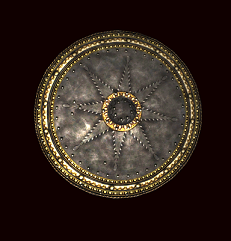