Located in Lombardy, Italy, Rotonda de Tome was dedicated to St. Thomas (The Apostle), in the 12th Century. Possible built on a much older foundation (7th Century), it was occupied by The Lombards. The exterior columns recessed into the facade are made up of several different type of Columns (fragments). Circular in design, The Rotonda may also have featured into City defenses as well as a defensive point. In 1407, a Monastery was built, but is was destroyed by the Armies of Emperor Charles V. The interior is comprised of 3 separate circular “inner rooms” or vaults. The Rotonda de Tome is noted for it's carved frescoes of Nature and animals. Renovated in the 19th Century, much of the 12th Century appearance was retained. It is not a functioning Church structure. 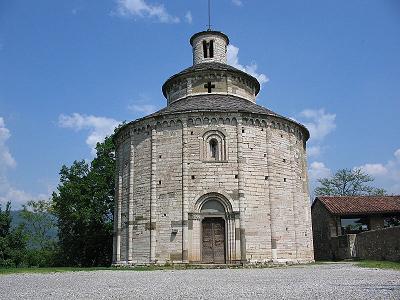