Rose Dunn would later be known better as The ''Rose of Cimarron'' – but in the beginning of Her life, Rose was a poor girl from a poor Family of Farmers in Kansas. Educated (to the 12th Grade), Rose would meet and fall in love with one George Newcomb, a known Outlaw and Gunman. Rose was but 15 years old at the time, but Her and George would become a couple almost immediately. And Rose left Kansas, twice as fast. Newcomb would join the infamous ''Wild Bunch'' Gang (with Rose in tow).

Rose served a valuable purpose to The Gang. She was able to go into various Towns for news, supplies etc. with no one even suspecting the shy and demur girl. So pretty, most Gang Members saw Her as their “little Sister'', and any disrespect to Rose from anyone was met with death. Eventually, Newcomb left The ''Wild Bunch'' to start out on His own again. And again Rose went with Him. History shows that perhaps Rose wanted to settle down and draw George from His ''life of crime'', Perhaps She wanted to start a Family, at any rate – Newcomb was having ''no part'' in this idea.

George was expecting His Brothers at their Home in 1895. Who showed was two Marshals who shot George dead. Many felt that Rose betrayed Her Lover to them (although She herself denied this claim for many years). Rose would go back to Kansas and took the fancy of a Politician. Married, no one knew Rose's background (perhaps to spare Her new Husband's career). It would not be until His death that ''Dime Novels'' seized upon Rose's Tale (of which she sold to Writers). Rose would marry again and move to Washington State. She lived until Her death in 1946 at 76 years of age. She was never indicted for Her role in aiding and supporting the infamous ''Wild Bunch'' Gang. 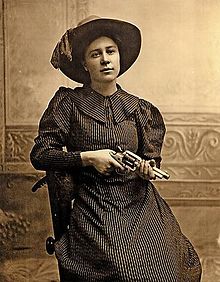