Instantly recognized by people as the "official" hand salute of Germany's Nazi Political Party (and later it's Military), the so-called "German Salute", is actually many thousands of years old. It wad actually the Salute of Rome's Legions. Often romanticized in many Films and Books, The Legion Salute did NOT involve the "thumping" of the chest prior to it's administration. Quite simply, the right arm was extended upwards and to the front of the body. Held at a 135-degree angle, all fingers of the right hand were brought close together. The thumb was brought under the hand (palm facing). The Legion used thus Salute to recognize a passing mounted Officer. Later, it was seen used to acknowledge The Emperor or Senate. Rediscovered Centuries later by Italian Fascist Benito Mussolini, adopted it as the Salute of his "Black Shirt" Political Party. Mussolini envisioned a modern rebirth of The Roman Empire in the 1920s. Later, Adolf Hitler would adopt The Legion Salute (slightly modified), for his Nazi Party. 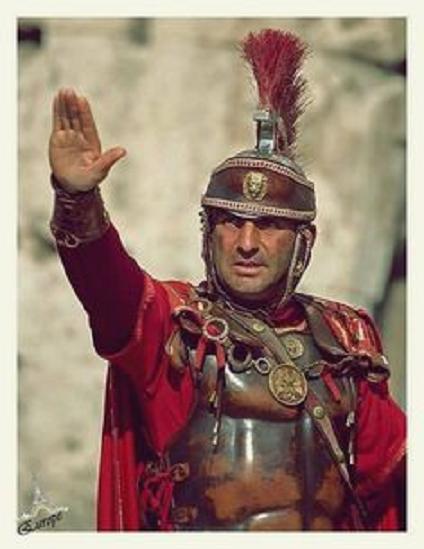