Although most of Rome's military was “armor clad”, some variations existed with regards to leather armor. Although examples of Roman leather armor existed in “The Arena” Games (with Gladiators), it was uncommon for the rank and file soldier to use it. Some examples were documented to have been use. It has been though that Early Roman Republic Units incorporated a form of this armor with the early formations of The Hastati (Infantry). It resembled the typical “Lorica Segmentata” (except with leather plated strips). Later, and possibly used by Commanders as “summer Armor”, a form evolved (2nd Century A.D.) These suits featured leather over-straps which connected to form-fitting leather Spaulders. In addition, leather shirts were made (quite thick), and served for protection (much as The Pteruges was used). Still, it was required that a Chain Mail Shirt be worn underneath (for maximum protection). The entirety of the suit and Mail was worn over the Tuncia. The leather “style” rose and waned even into “Imperial Rome” (but it was all but retired by the 4th Century A.D.) 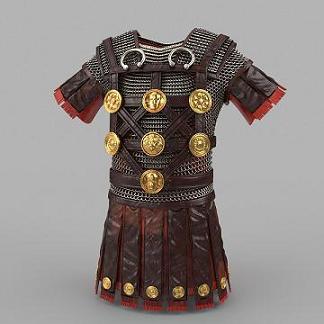