Born around 860 A.D. Rolf Gangr (Rollo in English) - was descendant from Norse Aristocracy. A a young Norse Warlord, he spent much of his early life conducting raids on France. It was Rollo who first attacked and “sacked” the City of Paris in 910 A.D. Returning the following year, Rollo and his Viking Army were defeated by The Franks. Forced into The Treaty of Saint Chartres, Rollow had to pay homage to King Charles III (The Simple). Charles was “wise” enough to figure that Rollo would keep “coming back”year after year. He made him a Lord and would give him land (The Seine), if he would be converted to Christianity. Rollo agreed. Charles also gave him authority to “protect The King's Lands”. Changing his name from “Rollo” to “Robert”- he will become the 1st Duke of Normandy (and mark the beginning of a long line of Normans). 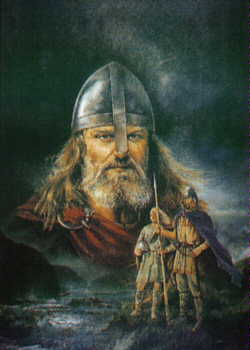