Better known to history as “El Cid”, (meaning “Lord”), Born in Vivar (Castile) in 1043 A.D. - he came from Noble birth. His Father was well though of – so with his death, the young Diaz was brought to the Court of King Ferdinand I to be Warded. Placed under the control of The King's Son (Sancho), Diaz was taught “The Art of War” (of which he excelled). When Sancho became King upon his Father's death in 1065, Diaz was made Commander of The Castilian Army. Sent to fight in The Reconquista against The Moors, Diaz was unequal in combat and tactics. However, many of the late King's children fell into quarrels over Sancho's succession. This led to a bitter War over his claim.

Diaz naturally supported his Liege Sancho. Putting down the “Pretenders”, Diaz had a change of fortune with Sancho's death in 1072. His Brother, Alfonso VI took the Throne (and his hatred towards “El Cid”). But Alfonso was well aware that “The Cid” was a National hero of Spain. His exploits were unrivaled (even by The King).It was determined to better “keep El Cid close” rather than have him executed. A true Knight that followed whoever was on The Throne, many in Court spoke against him. El Cid did little to stop these rumors. He was leading (often unauthorized ) military expeditions against The Moors. In 1081, he took Toledo and established himself as “Military Governor” (much to the delight of both Christian and Muslim inhabitants of the City). Although Governor, “El Cid” took not undue actions. King Alfonso saw it differently.

He feared “The Cid” would establish himself as a Ruler (one with a powerful Army at his throat). Despite the fact that Diaz openly declared Toledo was “ruled by Alfonso”, The King still exiled “”El Cid”. Trying to ally himself with several other Christian Princes – he was turned down when he offered them his services and Army (probably fearing Alfonso's reprisals if they did). El Cid offered his service to a Muslim Sultan who was quelling his own “Succession” problems, El Cid fought “on the other side” for 10 years. He gained valuable insight into the Muslim “military mind”. “The Cid” STILL had never lost a battle.

King Alfonso now grew worried that “El Cid”” may very well poise a Moorish Army at his Kingdom. He recalled El Cid to Court – reinstating him (and his Titles). Diaz had but one concession. He would not directly fight (only train and advise). This angered King Alfonso. Again (just as quickly) Diaz was exiled again. In 1091, “El Cid” was taken in by the Prince of Valencia. Diaz led his Armies against The Moors and vanquished them (taking back Valencia). Even in exile, King Alfonso “begged” him to return to help him with a Almoravid Invasion of Leon and Castile. Diaz came and destroyed them as well. Alfonso forgave all “errors”. Returning to Valencia (again as Military Governor), old “fears” (again from Alfonso's Court), sprang up. This time King Alfonso did nothing. “The Cid” had his last major engagement in 1097 against The Almoravids. At The Battle of Bairen, “El Cid” was outnumbered (he had 3,000 men to an Army speculated at 30,000!) Using clever tactics of ambush and the natural geography against his Host, - “El Cid” achieved victory.

His end came during a small cavalry engagement in 1099. He was shot through the neck by a Moorish arrow! Now dead, Spain began to suffer major set backs. The Muslims kept “El Cid's” body until 1238. It was returned to The Monastery of San Pedro Cardena (Burgos, Spain). Almost immediately, it was seen as a “Holy Shrine” by the people. His biography would be written – and in that his somewhat “Arthurian” legend began to grow. Much of his life was highly romanticized (and even possibly made up) – to “fit” the “National needs” of Spain for a true Knight and Hero. It somewhat remains that way to this day. 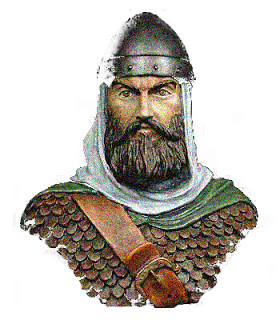